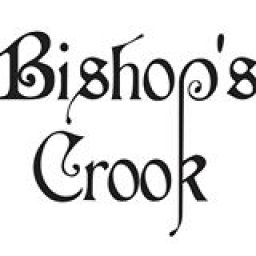 The Bishop's Crook Brewery was founded in December 2012, and was located in Penwortham. Initially there was a period of consolidation with much test brewing, and their next landmark came in November 2013 when they were granted a licence by HMRC to commercially brew their beers. Exactly one year later, in November 2014 they became members of SIBA, the Society of Independent Brewers.

Brewing ceased in August 2017, with the intention that work take place to increase the brewing capacity. Subsequently the brewery was mothballed, and there was no commercial beer production in 2018 or 2019. In April 2020 it was announced that brewing was to re-commence. However due to the Covid-19 lockdowns that year this return to brewing failed to occur.

The Withy Way (3.8%) - A light pale ale with floral, citrus and tropical flavours.

Ah Fuggit (4%) - A copper coloured ale brewed with traditional English hops and with a citrus twist.

With the opening of the Guild Ale House, Preston in February 2016, Bishop's Crook gained a regular outlet for their beers in the centre of Preston. A house beer Two Screws (Winding Staircase) became a semi-permanent beer there, while other Bishop's Crook beers also often made an appearance.