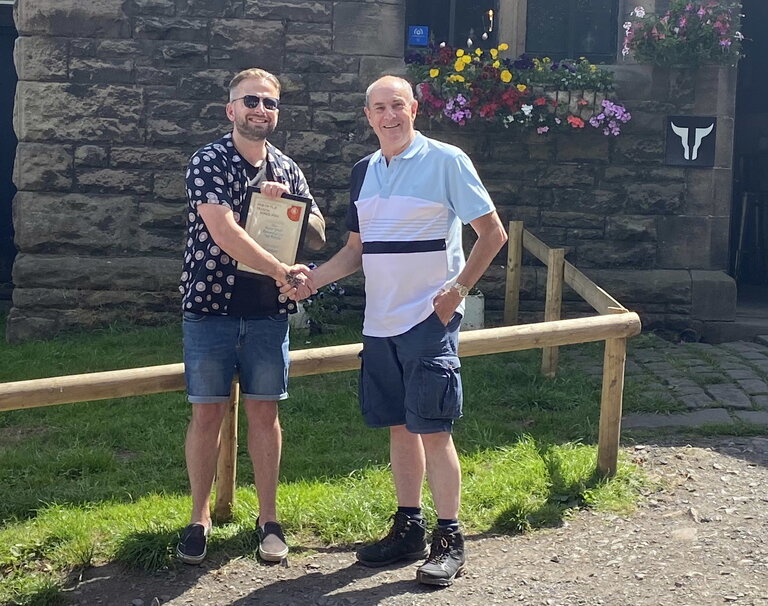 CAMRA Central Lancashire had a highly successful branch social on Sunday July 17th, with a mini-bus arranged to take a keen party of CAMRA members to three pubs in the Rivington area. As temperatures were rising, with the country going into some of the hottest days on record, the first stopping point (just as opening time beckoned) was the Yew Tree, Anglezarke. It was then a pleasant walk to the Rivington Brewing Co Tap, Rivington, and it was here that the business of the day was carried out, with branch Chairman Adrian Smith (pictured above right) presenting the Summer 2022 Pub of the Season certificate to Phill Clarke of the Rivington Brewing Company. The afternoon was then concluded with another short walk to sample the beers on offer at the Rivington, Rivington. All those out for the day had a great time, with the Rivington Brewing Company Tap considered an excellent choice for the branch's Summer 2022 award. 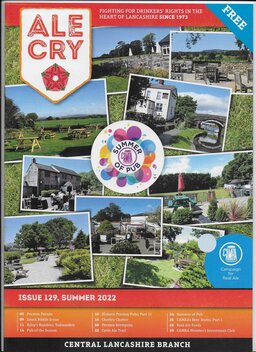 The first week of June has seen the appearance of Ale Cry 129, the Summer 2022 edition of the CAMRA Central Lancashire branch quarterly magazine (on-line version available here). This latest issue of Ale Cry celebrates CAMRA's Summer of Pub promotion, with an appropriate pub, the Rivington Brewing Co Tap, Rivington being revealed as the branch's Pub of the Season for Summer 2022. Alongside the regular local news articles on what is going on in Chorley, Preston, and South Ribble, there is a Riley's Rambles article on Todmorden, a Historic Pubs article concentrating on pubs in the Fylde Road area of Preston, a Cycle Ale Trail article looking at pubs conveniently located near the Guild Wheel, plus there is an article on the history of Preston Brewpubs. Copies of Ale Cry 129 will be available from pubs and clubs throughout the branch area in the coming weeks.

CAMRA Central Lancashire held its branch AGM on June 23rd at the Black Horse, Preston. Due to the ongoing Covid restrictions this was the first face-to-face AGM since 2019, with there being no AGM in 2020, and with there being an AGM held on Zoom in 2021. A good number of local members were present on the night, along with caretaker Regional Director Kevin Keaveny and Lancashire Area Organiser Rick Pickup. Regarding the election of a CAMRA Central Lancashire branch committee for 2022-23, it was very much a case of 'as you were', with the majority of the existing branch committee being re~elected to carry on with their good work for another year. Once the business part of the meeting was over, those present were entertained by local historian Steve Halliwell who gave an interesting talk on Preston's pubs past and present. 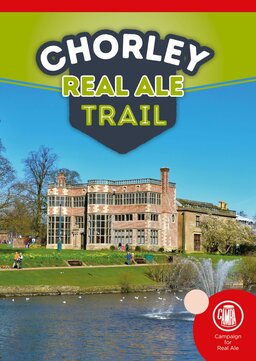 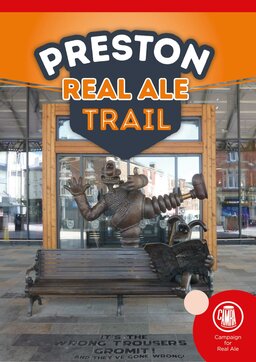 Updated versions of the Chorley and Preston Real Ale Trails have now been produced. Copies of these leaflets will be available from many local pubs and clubs in the coming weeks. Additionally on-line versions of the leaflets can be found here:- 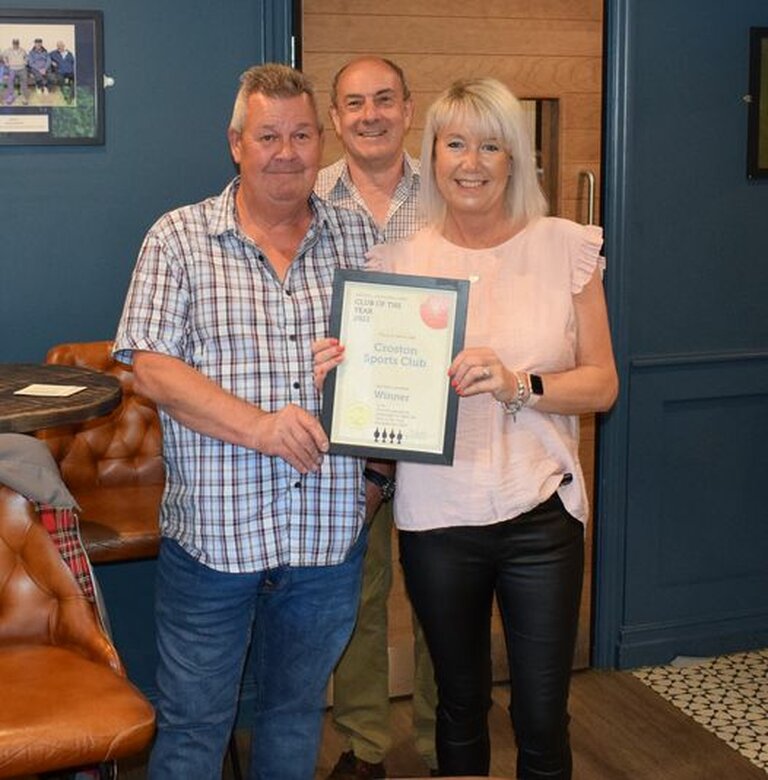 As previously announced the CAMRA Central Lancashire branch's Club of the Year for 2022 is Croston Sports Club. On May 26th the branch held a social in Croston, with a presentation of the Club of the Year certificate conveniently being made on the night. Pictured holding the certificate are Geoff (the cellar manager) and Lisa Watkinson (the club manager), while to the rear CAMRA Central Lancashire branch Chairman Adrian Smith also manages to get into the photograph. 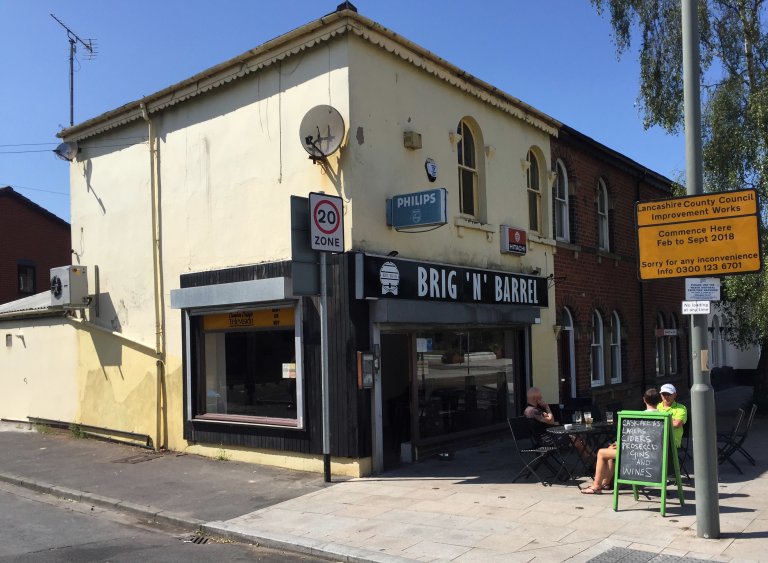 Unfortunately we have news of a pub closure this month, with the Brig 'n' Barrel, Bamber Bridge closing down without any real advance warning. In June 2018 the Brig 'n' Barrel was the first micropub to open in Bamber Bridge, and for the last three years, since it became eligible, it has been rewarded with a place in the Good Beer Guide. Although the present owners have chosen to leave the pub, there are hopes that new owners can be found to keep the micropub going in what has become a much improved area for real ale drinkers. See the Good Beer Guide 2022 webpage for the latest information on the Good Beer Guide. 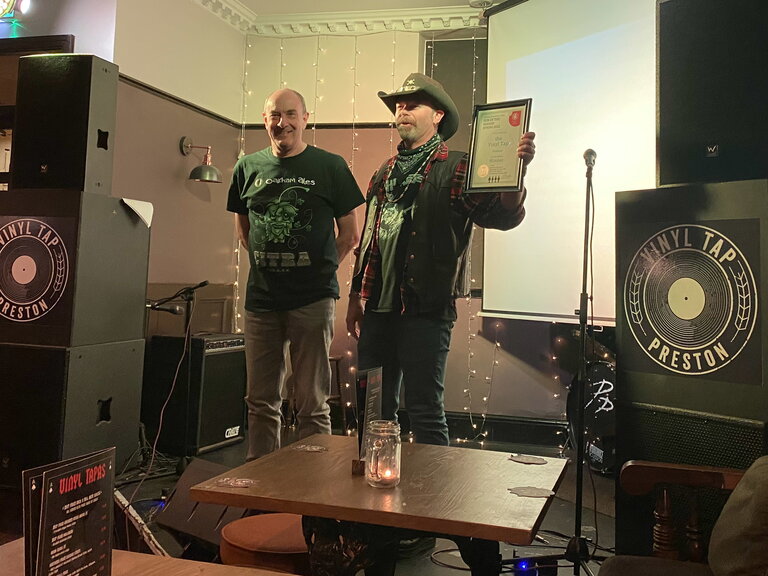 On April 19th CAMRA Central Lancashire held a branch social at the Vinyl Tap, Preston, the event being organised to recognise that this was the pub that had been chosen as the branch's Pub of the Season for Spring 2022. To celebrate the occasion a select band of local CAMRA members were in attendance, and all those present were in agreement that the Vinyl Tap was an excellent choice for this acclaimed quarterly award. The above photograph shows landlord Sean Keefe holding the Pub of the Season certificate after it had been presented to him by CAMRA Central Lancashire branch chairman Adrian Smith. This is the second CAMRA award to have been won by the Vinyl Tap, with it previously having been the recipient of the Most Improved Pub of the Year award in 2019 (the last time that this award was made - see Most Improved POTY 2019). 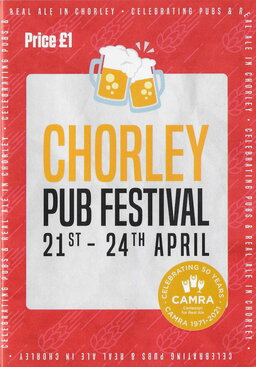 The first Chorley Pub Festival took place over the weekend April 21st-24th, and by all accounts was a great success. Not an official CAMRA event, although CAMRA Central Lancashire did play some part in the planning, the Chorley Pub Festival saw 14 pubs in Chorley rise to the occasion by providing an impressive range of beers and a good weekend of musical entertainment . In recent years Chorley has gained an unrivaled reputation for the variety of its many pubs and micropubs, and for some visitors this will have been their first chance to look in at the newer bars like Ben's Tap & Bottleshop, Chorley, Clarke's Sibin, Chorley, and Riley's Taproom & Wine Bar, Chorley. 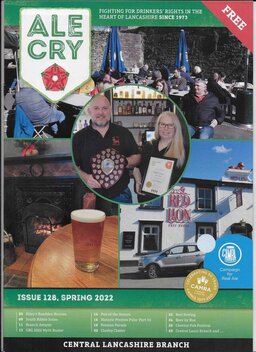 The first week of March has seen the appearance of Ale Cry 128, the Spring 2022 edition of the CAMRA Central Lancashire branch quarterly magazine. A 32 page issue, the Vinyl Tap, Preston is revealed as the branch's latest Pub of the Season winner, while pubs on the Stagecoach 125 bus route from Chorley to Bolton are featured in a Beer By Bus article. Historic Preston Pubs now reaches Part 10, while Riley's Rambles this time looks at the pubs of Buxton. Also included are the regular Chorley Chatter, Preston Parade, and South Ribble Scene articles which bring you up to date on what has been happening in the branch area over the last three months. Copies of Ale Cry 128 will be available from pubs and clubs throughout the branch area in the coming weeks, and for an on-line copy of the magazine, go to the Ale Cry webpage. 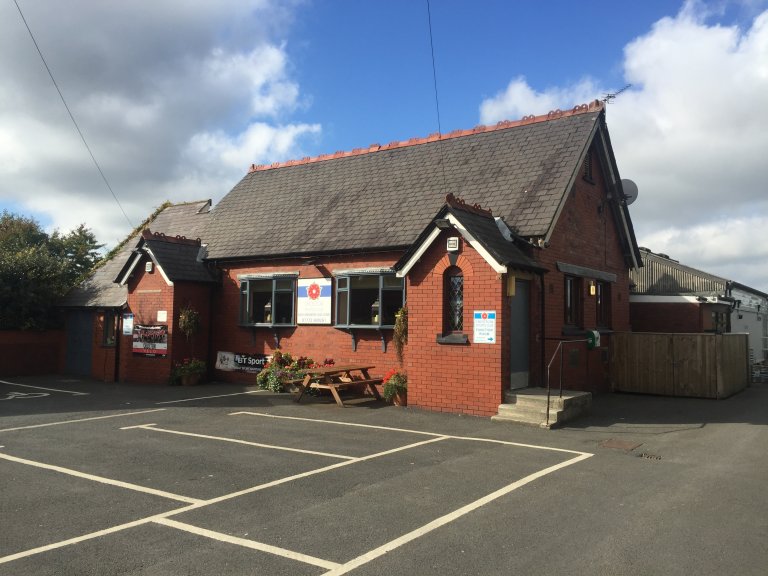 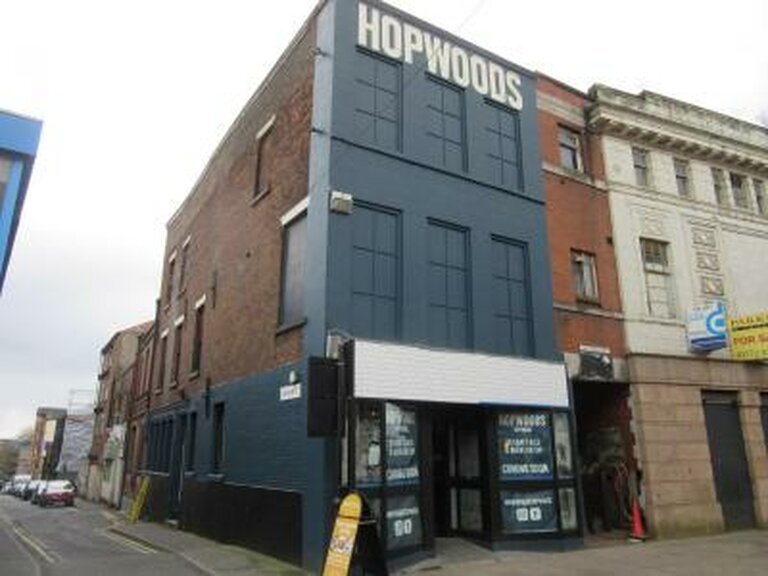 March 5th saw the first of two major pub openings this month in the CAMRA Central Lancashire branch area. Work has been going on for quite some time to transform the former WH & J Woods Ltd tobacco manufacturers premises on Church Street, and we now have Hopwoods Tap House, Preston. Owned by the people who run the highly successful Baluga Bar & Club just across the road, it is an establishment that hopefully will be of more interest to local real ale drinkers. Hopwoods is selling four handpumped beers (initially one being Windermere Pale), while there are also claims that it will be offering 'the largest selection of craft beers on tap in Lancashire'. Apparently only open Fridays, Saturdays, and Sundays, initial reports are that the price of a pint of beer is rather expensive. 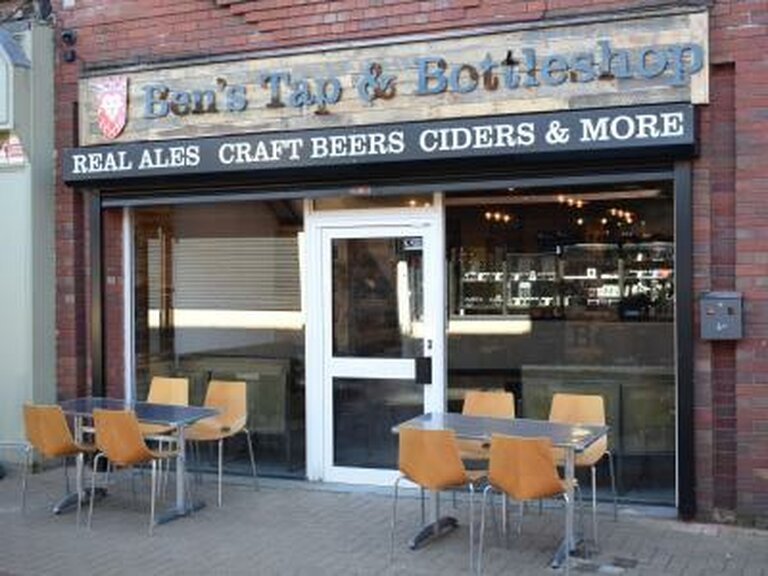 March 18th and there was another major new pub opening in the CAMRA Central Lancashire branch area. This was the opening of Ben's Tap & Bottleshop, Chorley, the long-awaited Chorley town-centre outlet for the Ben's Brewery people. Located in former coffee shop premises on Market Place, Ben's Tap & Bottleshop has six handpumps, and is selling four beers from Ben's Brewery plus two guest beers. Initially the guest beers have come from breweries such as Beartown, Doncaster, and the Marlpool Brewing Company. Also available is a selection of craft beers and real ciders. 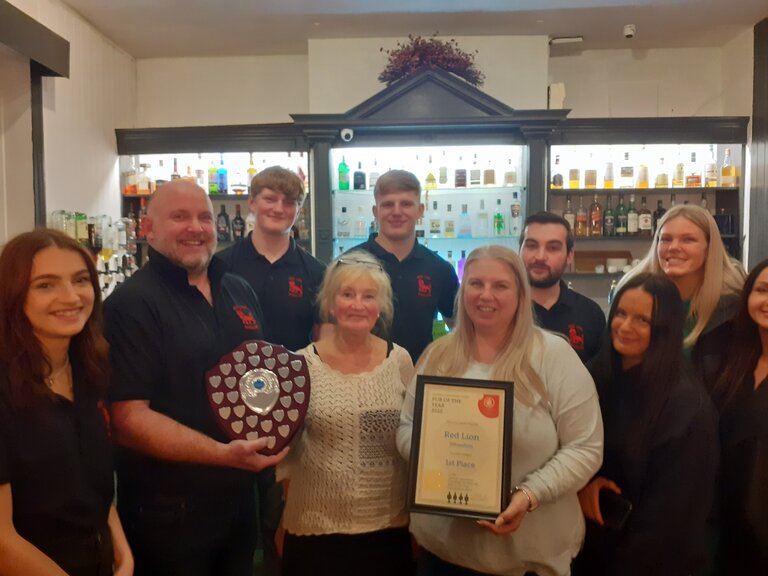 On February 10th CAMRA Central Central Lancashire held its second branch social of the year. The venue was the Red Lion, Wheelton, the occasion being that it had been chosen as the branch's Pub of the Year for 2022 and there was to be a presentation. There was a good turnout on the night, with the pub packed out with locals, staff and their families, plus about a dozen CAMRA members. CAMRA Central Lancashire branch Chairman Adrian Smith was there to hand over the Pub of the Year shield plus the Pub of the Year certificate. Pictured above is landlord Richard Roberts with Nikki and their staff just after the presentation had taken place. 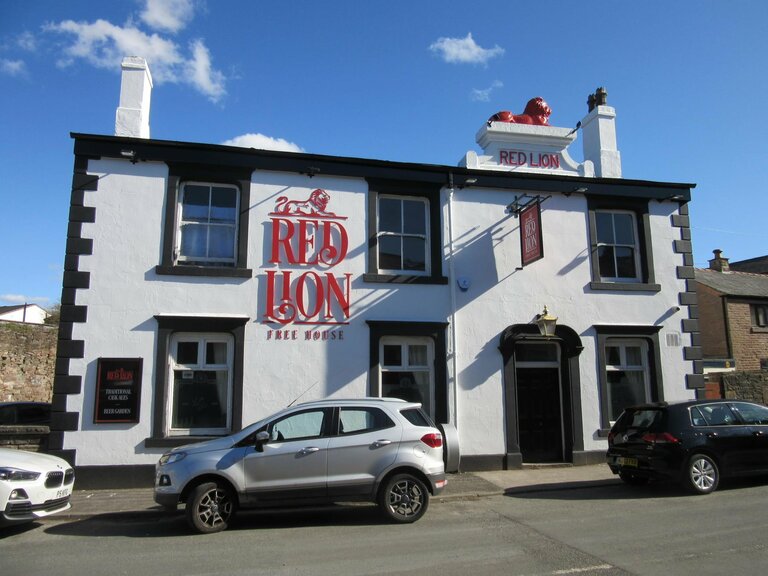 The Red Lion, Wheelton has been selected as the CAMRA Central Lancashire branch Pub of the Year for 2022. The Red Lion was judged the winner from a shortlist of six, the other nominations being the Black Horse, Preston, the Dolphin, Longton, the Market Ale House, Leyland, the Masons Arms, Chorley, and the Plau, Preston. This was the first year that judging had been carried out by the branch's committee members who were independently applying the scoring criteria that has been devised by CAMRA HQ for the regional and national Pub of the Year competitions. CAMRA members and friends are welcome to attend a social at the Red Lion on February 10th when the Pub of the Year 2022 award will be presented (see Branch Diary). The Red Lion will now go forward as the Central Lancashire branch nomination for CAMRA's Lancashire Area Pub of the Year award. 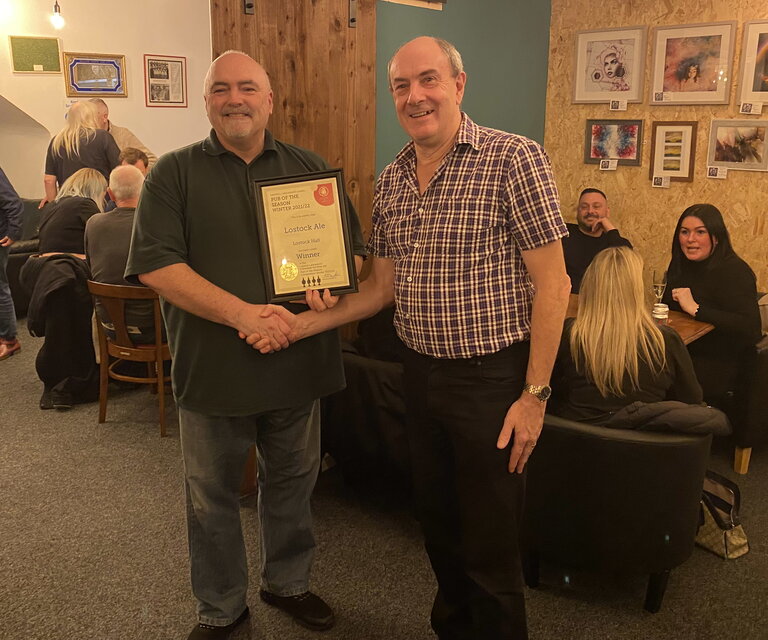 On January 20th CAMRA Central Lancashire had its first branch social of the year with a good number of local members assembling at the Lostock Ale, Lostock Hall for the occasion. For many of those present it was their first opportunity to see the recently enlarged Lostock Ale, with the pub now more than double in size having been extended into the former Age Concern shop premises next door. The reason for the branch social was that the Lostock Ale had been chosen as the branch's Pub of the Season for Winter 2021/22 (for more information see the POTS Winter 2021/22 webpage). Pictured above, Lostock Ale landlord Ray McLaughlin holds the Pub of the Season certificate, alongside CAMRA Central Lancashire branch Chairman Adrian Smith.

For older Local News go to Looking Back ....